I had a chance to travel to the northeastern of Thailand. I was lucky to be there at the right time, because there is a big variety of foods in summer. So, I did not hesitate to try all of the rather unusual kinds of foods. 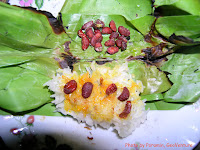 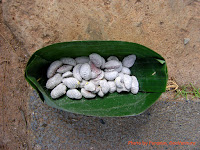 Cicada eggs can be found in summer at local markets, especially in the northeast of Thailand.
These eggs are being wrapped in banana leaves and then grilled for a few minutes on a charcoal fire. When they are done, they will change their color to a deep red. Then you can either eat it with sticky rice or mashed. Don't forget to put a little bit salt on it. The taste is somewhat oily, the texture is crunchy and they pop in your mouth  nicely. Good actually! 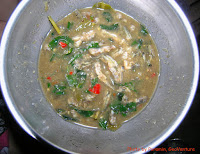 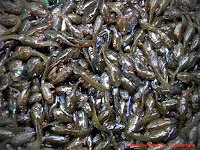 This kind of food comes with the rainy season. Before cooking, tadpoles have to be cleaned with water and taken the guts out from their body. You might wonder how local people take the guts out. They just press the tadpole's body until the guts come out through their anus. Then they are being cleaned again. The tadpoles, not the local people.
Tadpole soup is eaten with steamed or sticky rice. It tastes a bit spicy. Actually, Local people eats it with sticky rice. Sticky rice is the main staple food in the northeast of Thailand. 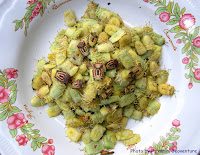 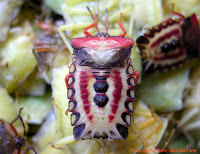 Stink bugs are both served as local snack and main dish. But this bug can only be found during the summer season. So, you have to come to the right time. Otherwise, you will probably miss it.
The way to cook these bugs is easy. First, you have to rinse them. Then fry them on a pan and put some salt on them. Keep frying until they turn brown or yellow, which means the Stink bugs are now ready to be served. I had it for a snack, sure it smells stinky, but the taste is great. 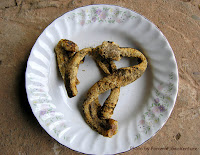 I want to say Wow! even though I know grilled buffalo skin well and had it many times before. It's a long-straight dark thick piece. After it is grilled, it looks different from what you see in the above picture. As you might already guess, it is really hard to chew. People still like to eat it, though, no matter how hard to chew, and they eat it with sticky rice.